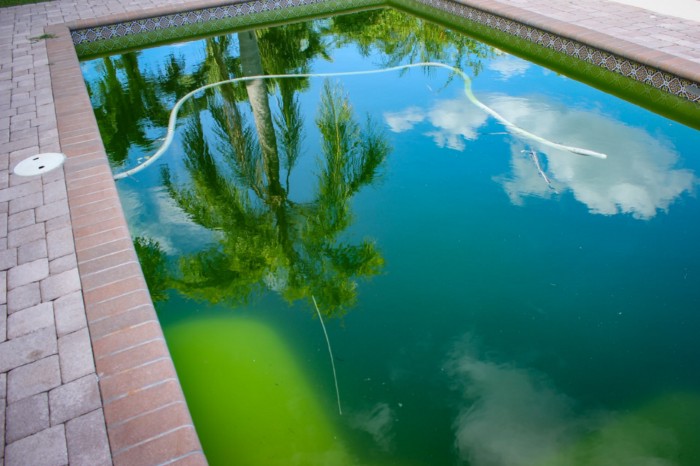 High temperatures, a sunny day, and plenty of company — factors that make for a great pool party — also can energize a group of nasty intruders: algae.

Without any apparent warning, algae spores can turn sparkling pool water into a green murky mess. Pool surfaces can develop a slippery coating, potentially dangerous as well as unsightly. Powdery yellow-brown deposits of mustard algae may appear on the walls or bottom of the pool or spa. Or, tar-like patches of black algae may appear on stairs, in corners, or in other nooks where water circulation is problematic.

How could this happen? Could have been the wind and rain from the night before that dumped these opportunistic invaders into the pool, or a pressure wash of the deck. Days of hot sun and a heavy bather load might have warmed the water and depleted the sanitizer, making conditions ripe for an algae bloom. Phosphates in the run-off from nearby landscaping may have fueled their growth by destroying any chlorine residuals that would have prevented algae from developing in the first place.

Whatever the reason, action is needed. Once an algae bloom occurs, the plan of attack involves the use of an “algaecide,” a chemical treatment that kills algae and also prevents it from recolonizing. The best policy, however, is to prevent its formation, which can be accomplished by using an “algaestat” on a regular basis. Whereas algaecides can kill algae spores and prevent them from recolonizing, algaestats can only inhibit their development.

It’s much easier to be proactive against algae, compared to fighting an outbreak. Keeping a slightly higher sanitizer (i.e., chlorine or bromine) level is one way to take preventive action. However, should the sanitizer level drop because a heavy bather load creates a competing demand for disinfectant, bacteria may develop. They will also compete for available sanitizer, allowing algae to gain the advantage.

Polyquats have a longer molecular structure than quats and can affect all algae types. Polyquats are non-foaming (perfect for spas) and suffocate algae by adhering electrostatically to their outer membrane, just as metal filings cling to a magnet.

Copper/silver ionization systems produce trace levels of the two metals to kill algae. Reportedly, copper works well against mustard algae and silver is potent against black algae. Only the copper ion needs monitoring (use K-1730); when copper readings are good, the silver level will be fine too.